🚨SPEND $100 GET ANY PIECE OF LOUNGEWEAR FREE CODE: EOFY22💥 (add the garment to your cart before applying the code)

FREE 30 DAY WORKOUT EBOOK WITH EVERY 3 PACK OF FACRIC BANDS Click here to shop!
SPEND $100 GET ANY PIECE OF LOUNGEWEAR FREE CODE: EOFY22 ends 11:59pm AEST 30/6/2022
FREE SHIPPING ON ALL AUS & NZ ORDERS OVER $50 Click here for updated shipping timeframes due to COVID-19

THE HUMBLE PUSH UP

Imagine, you’ve seen the advertisements plastered all over the gym and decided to sign up for the 2021 Push-Up challenge! You’re excited about getting buff and contributing to a worthwhile campaign to increase awareness for Mental Health in Australia and raise much needed funds to support individuals who might not be in the right ‘headspace’. But wait a minute… before we get stuck into the exercise, we need to clarify a few things.

WHAT EXACTLY IS A PUSH UP?

For years we have heard these words thrown around a lot, some might even say it is the ‘godfather of strength exercises’, but let’s break down what a push-up actually is. A push-up is an upper-body, bodyweight pressing exercise, which is considered to be a compound movement. This means that it incorporates numerous muscle groups, moving numerous joints of the body simultaneously.

To perform a push up, begin by setting yourself in a position on the ground, with your hands placed just outside shoulder width, your legs extended, and your back, hips and heels all in a straight line, as seen below.

Begin lowering your torso towards the ground by bending you elbows, keeping your arms at approximately 45 degrees out from your body. Although this ’45 degree’ rule is not crucial to the exercise, variation from this can alter the major muscles recruited to perform the exercise, or potentially place your shoulders in a compromising position.

Continue lowering until your elbows are at approximately 90 degrees, then begin to push yourself away from the ground by extending the elbows.

WHAT MUSCLES DOES IT WORK?

The primary muscles involved when performing a push up are the Pectoralis Major (chest), Anterior Deltoid (Shoulder), Triceps Brachii and the Rectus Abdominus (providing core stabilisation).

What if my shoulders and elbows feel unstable?
If you, like a lot of people, find it difficult to comfortably perform a Push up, there is a good chance that these are the muscles that may not be as strong as they could be. Fortunately, there is a plethora of exercises that can be performed with minimal exercise equipment that will assist in building strength in these muscles!
Some examples might include:
– Triceps Push-downs
– Anterior Deltoid raises
– Dumbbell Overhead press
– Dumbbell Chest press
– Dumbbell Chest fly

WORKING TOWARDS YOUR FIRST PUSH UP!

So we know the science involved in performing this exercise, but let’s be honest, the push-up is pretty intimidating. If a conventional push-up is not quite achievable yet, an incline push up is a fantastic alternative. As seen in the picture below, this exercise can be completed using stable box, bench, or step.

This variation of push up is an excellent regression for several reasons: 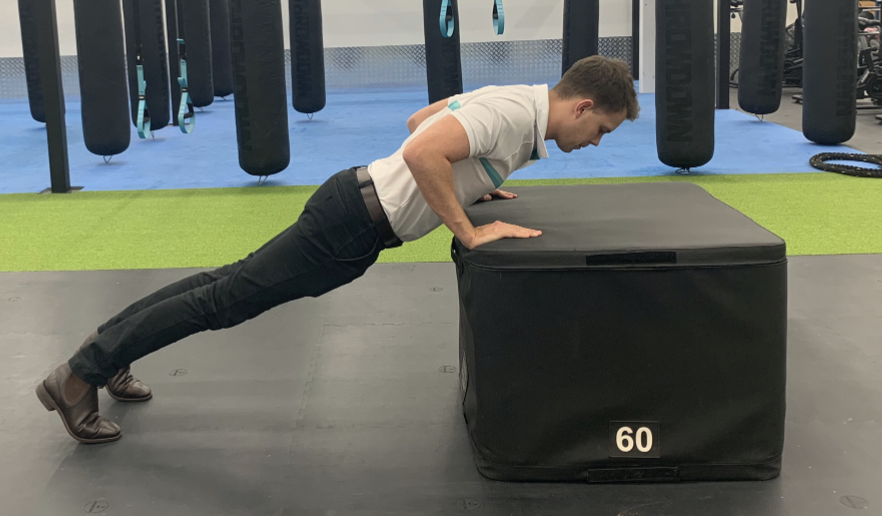 WHO SHOULD AVOID IT?

The Push-up is a terrific upper-body pushing exercise, however it may not be for everyone. Some examples of individuals that may need to find alternative exercises include:

If you or someone you know are unsure about whether or not a push-up is an appropriate exercise to include in your program, speaking to an Accredited Exercise Physiologist is a great place to start!

Correctly performing a Push-up is a terrific achievement as it requires adequate upper body strength, however it may not be as simple for everyone at this stage… but that’s ok.

As shown above, there are numerous variations of the exercise which can be performed prior to progressing to the more convention push-up.This blog should act as a fantastic starting place to help build towards a lifetime of push-ups, and absolutely smashing the 2021 Push Up Challenge!